The blog that is not one 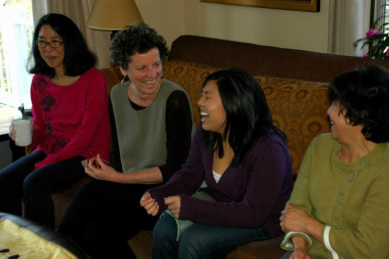 Kerry reads the Runes (L to R Carol Murashige, Bernadette, Cresing's daughter, Cresing)
This isn't really a blog.
It's a place holder for stories and photos related to "missionary kid" years in Manila. There are sometimes midrash on those texts and interruptions. It will be divided into Early Years 1957 - 61 ( Malate days, Orange Jesus, spirits, trees, birds, 'early exegesis'), School Days 1962 - 67 (Union Elementary School, SS Wright family escapades, Christan ed, longing to belong) and Days of Rage 1968 - 72 (UP Prep high school, strikes, anti-imperialism, sexuality). In the interruptions I work through the sexualized 'blanchitude' of white American girls in the height of the Cold War at the edge of American Empire. I wrote these stories from memory and from my mother's letters. This website is, as my father sermonizes, a  sacrament of remembrance.

How to read it
Start in the archive; they are kind of chronological. Read by Categories. Take the middle outward. Or like life, start here.

The letters
Both my parents, Richard and Eunice Poethig, are Presbyterian ministers, my father ordained in 1952 and my mother in 1979.  They were in the Philippines as fraternal workers from 1957-1972. We are their five children: Scott, Kerry (me), Johanna, Margaret, and Erika, the only Poethig born in the Philippines. Our primary relative was my mother's mother, Juliet Stroh Blanchard, though we also visited dad's sister Aunt Erna and family and mom's brother Uncle David when we visited the U.S. on furlough.

Letters are a lost art. From 1957 to 1986, my family produced and saved copious "correspondence." Our life in the Philippines was chronicled by my mother to her mother. Mom wrote about Christmas gifts for the kids, who was sick, Presidential elections, Ellinwood church issues, her religious studies class at Philippine Women’s University, updates on dad’s work in Industrial Evangelism. Grandmother produced letters in carbon copies. She mailed us the original and copies to Uncle David who was in Liberia and then Ghana for his doctorate fieldwork in the 1960s. My mother typed or wrote in clear sharp script on whatever was at hand—air forms, onion skin, regular sheets. Her letters arrived at  Adirondack Trail in Dayton, Ohio or met my peripatetic grandmother at various hotels. Grandmother sent us colorful postcards with stamps from Saigon, Bangkok, Delhi, Lagos, Kampala, Cairo, Johannesburg, Lima, Berlin. Dad wrote from his church and labor conferences in Japan, Hong Kong, Thailand, Geneva, but I mostly remember his pasalubongs - return gifts. The only gap in correspondence occurred in 1962-64 when we were on furlough in the United States and then Juliet as a 60-year-old Peace Corp volunteer followed us back to Manila to teach English at the University of the Philippines, Dilliman campus.

Our Christmas letters also diligently marked family progress, ending with a parting homily on local politics and God's justice. My favorite Christmas card, of 1967 vintage, juxtaposed 5-year-old Margaret’s happy picture of smiling houses with the pragmatic blessing: “May you have water in your pipes, peace on your streets, and justice in your courts.”

Once we began to disappear into the American fog, we kids began to write to each other.  Scott wrote pithy descriptions of his first year at College of Wooster  and in 1972, Johanna wrote from Samos Island in Greece enroute to the Chicago with mom and one-year-old Erika. I remained to finish high school in 1972 and was caught up in Martial Law. My parents kept my messy letters and more restrained reports from Louise Palm, Aunti Soli and Aunti Eva who had hosted me. Back in the U.S., the letters dwindled. Johanna wrote from UC Santa Cruz and her trip around the world, Scott from Yale, and post-docs in Missouri and Stanford, Margaret from Wooster. I wrote from the Cooke ranch in Oregon, Minnesota, and then from Bataan Philippine Refugee Processing Center in the Philippines at the end of Martial Law.  We finally defaulted to birthday cards, the phone, and now email.

NOTE: If you want to get in the Pinoy mood, here is a 365 Great Pinoy Countdown, I'll be taking a few beloved objects from the list.
My family on the web
My spouse Victoria Rue is a Roman Catholic Woman Priest and many other wonders.
Dad tells his own early story On the Sidewalks of New York.  My sister Margaret has transformed his story into gorgeous podcasts.
Mom's writing is collected on Margaret's website (she is currently writing on 13 generations of American ancestors from the Mayflower forward).
Scott is a plant development geneticist at UPenn, but we know him for his Food.
Johanna has her own website as a visual, public and performance artist in California.
Margaret after her full time job at HUD, has a website where she posts her quilts, dolls, photos, theater achievements and recipes - and the family archive.
Erika, formerly Acting Assistant Secretary for Policy, Development and Research at HUD that published Evidence Matters is now with the Urban Institute.