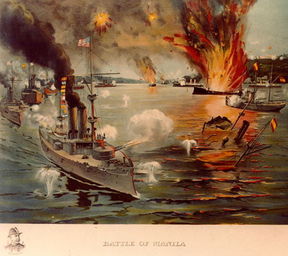 USS Olympia art NH 91881-KN.jpg Wikipedia
The Philippines was America’s former colony. It had been “bought” by President McKinley from Spain in the 1889 Treaty of Paris at the end of the Spanish-American War.  Filipinos joke about their history as “400 years in the convent, 50 years in Hollywood."  The arrival of Americans initiated a hand-off from the Catholics to the Protestants as well as a separation of church and state. In the 1902 Philippine Organic Act, the Catholic Church was disestablished as the state religion. Spanish friars had welded enormous power. Intent on “filipinization,”  American officials negotiated with the Vatican to buy the friars' estates for $7.2 million, about 166,000 hectars mostly around Manila. These friars' estates were resold to Filipino elite. The Vatican promised to replace friars with Filipino priests as well as other non-Spaniards, but refused to withdraw religious orders.

Presbyterians were first to arrive. James Rodgers came like his Catholic predecessor the Augustinian friar Urdaneta under the arc of gunfire, as
Admiral Dewey's ships arrived in Manila Bay. By 1901, the Philippines had been divided into mission territories by American missionaries so that they wouldn’t run over each other. It looked like this:

Presbyterians were more interested in education and medicine than conversion. Since so there was so much investment in educational institutions, Presbyterians relied on American capital and the intervention of diplomatic personnel, particularly in the case of Silliman University. Here's a quote from the Presbyterian Historical Society.

Medical work was first initiated in Iloilo in 1900 with hospitals, dispensaries and nurses' training facilities later established at Albay, Bohol, Dumaguete and Tacloba.  Because of the elaborate and costly educational program established by the American occupation, the Board of Foreign Missions limited its educational efforts to three institutions. These included Silliman University in Dumaguete, the first Protestant school established in the Philippines; the Ellinwood Bible School and Union Theological Seminary, established in 1899 and 1907 respectively and both located in Manila. The Board of Foreign Missions encouraged the Filipino Church to be self-supporting and its plans for evangelizing the vast untouched regions were contingent upon this concept. Evangelization was effected via weekend and bi-monthly Bible institutes, annual Vacation Bible Schools, kindergarten instruction and informal home visitations. 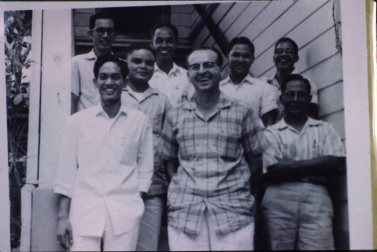 Meanwhile, the Philippine-American war raged from 1901-1913. American occupiers labeled anticolonialist Filipinos as insurgents and bandits. After this bloody, brutal war, the U.S. retained the Philippines as a colony, ostensibly to train Filipinos for self-governance, but primarily to establish a stronghold in the Pacific.  A few American anti-imperialists decried this a "paralyzing influence of imperialism".

Southeast Asia was a cluster of colonies in the early 1900s. The British occupied Malaya, Hong Kong and Burma through India, the French, their Indochine, the Netherlands, the Indonesian archipelago and the Americans held the Philippines as their colony. Only Siam was independent. All these colonies were targets of Imperial Japanese military aggression in 1941. Japan's Greater East-Asia Prosperity Sphere was intended to free Asia of European colonial dominance and ultimately benefit Japan. Most Americans don't know that Japanese bombers intended to launch simultaneous surprise attacks, one at Pearl Harbor on December 7th, 1941 and another across the international dateline on December 8 in the Commonwealth of the Philippines, though bad weather foreclosed this. Gen Douglas MacArthur was defeated by the Japanese in 1942 and he fled the Philippines vowing to return. All Americans, including missionaries were gathered into internment camps primarily at the Los Baños Internment camp and Santo Tomás University in Manila.

Only after WWII did the U.S. grant the Philippines its independence on July 4, 1946. Manila was left in utter ruin. In the "Battle of Manila" between the Japanese and Americans both seemed intent on destroying what the other couldn't have.  During the 1960s President Magsaysay changed the nation's Araw ng Kalayaan to June 12th to commemorate General Emilio F. Aguinaldo's proclamation in Kawit, Cavite in 1898.

Before the war, Presbyterians had plans for a United Evangelical church that drew together Presbyterians, United Brethren, Disciples of Christ and Congregationalists and early on the Methodists. After World War II, this union was consolidated at Ellinwood Malate Church and the new denomination was called the United Church of Christ of the Philippines (UCCP). After the war, the American mission board was pressed by national churches to shift  from US-dominated missions to partnerships. National churches would identify the kinds of workers they needed, who would work under the guidance of nationals.  This was a radical reversal - Americans working under the supervision of nationals.  The United Presbyterian Church in the U.S.A. set up COEMAR (Commission on Ecumenical Mission and Relations) a great rascal of an agency, in my opinion, which welcomed this decolonizing model of mission as the “Church for a New Day”. Because it was a new day of partnerships, departing Americans were called Fraternal Workers rather than missionaries. So my parents were fraternal workers to the Philippines in a short-lived era of progressive mission.